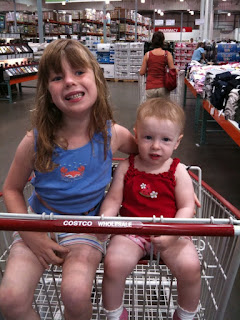 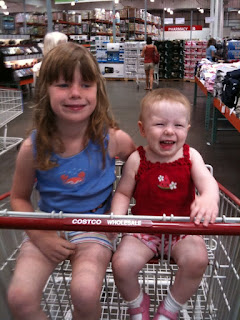 I was giving the new phone's camera a test this weekend... I was then planning on downloading the pics directly to my blog. Well, I think technology hates me.. Anyway, I did it the long way and here are a couple pics I took.

p.s Jessie is laughing not crying

Jessie's favorite words are ok, and no. Evidently she also says not ok.
Posted by Choun Family at 9:02 AM No comments:

Wow, it's been a long time since I've blogged. It's hard when you're in the thick of it to notice new things.

So, what is Jessie doing now? Well, she is running around quite proficiently. She still likes to sing and does that daily. In the past she would use a word and then who knows if you will ever hear it again. For the most part that is still true but she is using her words with more frequency now. She also seems to be taking directives better now. For example, sit down to drink your milk. Some words that she uses... banana, apple, Stella (her friend in class), bye-bye, hello, hi, ba ba (cup), ma (more), mil (milk), na na (night night), 1-2-3 (more on that later) Well.. we're getting there, more every day. She blows kisses, which I think is cute.

Jessie is doing well in her class. I think she thinks she is one of the teachers. She pats the other kids to try and get them to nap. She returns any dropped blankets or binkies to their rightful owner. She wipes down all the toys. She also takes good care of her babies (toys). Jessie will be going on to the next class at the end of this month. She can feed herself (sort of), talks a little, does role play (which is supposed to be good for her age). I forget all the criteria... but she's ready.

How, could I forget... she loves to go outside! She stands at the door like a dog and makes noises that she wants to go out (all the time).

She also loves to swim! I can not believe how much she likes to swim. All the parents in her swim class are jealous. She doesn't really kick or do her arms to much, but she loves to float on her back (rare) and she loves to go under water. In class they say.. 1-2-3 big breath eyes in and then they dunk them. Jessie gladly puts her own face in the water. Yesterday we where at my moms pool and she kept saying, ma ma (more more) un-oo-ee (1-2-3). It was a hoot, she couldn't get enough. Jamie was really coming into her own too. She was getting comfortable in the deep end and swam the width of the pool. We have two little fishes.

Jamie starts first grade in 2 weeks. On top of her regular curriculum of writing, reading, history, math, drama, music, art, and PE.. they will also be adding computers and spanish. We'll see how it goes!
Posted by Choun Family at 9:08 AM 1 comment: